With PhD in hand, postdoc scholar joins the band

With PhD in hand, postdoc scholar joins the band 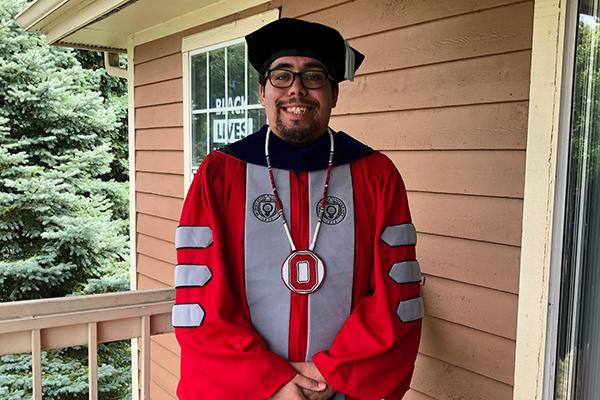 New members of The Ohio State University Marching Band are all given a rookie name, a nickname bestowed on them by their peers.

Some rookie names are silly. Some are serious. Some require careful thought. Others pop into existence instantly.

When first-year cymbal player Deondre Smiles let his new bandmates — mostly undergraduate students — know that he had already earned his PhD in geography from Ohio State, the rookie name came quickly. Smiles became “Megamind” after the large-brained titular character of the 2010 DreamWorks movie.

That nickname was one of the first steps in Smiles feeling accepted into the band, he said. While he was initially worried that his age gap or his potential to be one of his bandmates’ teachers might cause some friction, he quickly became part of the family.

“I’m 12 years older than some of them,” said Smiles, 30, who is now in his third different university marching band. “That kind of melts away when we’re really focused on learning our music or our drill. We cease to be a postdoc and an undergrad. We’re band members at that point.”

Smiles’ journey to TBDBITL started in Minnesota, where he picked up music early as a child in the Twin Cities. For the first decade of his musical journey, he played the viola. But in high school, he made the switch to percussion and got more involved in band.

Also as a child, he took an early interest in geography. He read atlases cover to cover. A favorite pastime was plotting out imaginary road trips he might take, seeing which routes he could follow to get from Point A to Point B.

That love for maps carried over to college, where he majored in geography at St. Cloud State University, a school with an enrollment of about 15,000 students located an hour northwest of Minneapolis. While a student at St. Cloud, Smiles was a drumline section leader and spent five years in the university’s sports band.

But his academics were never really a focus until the middle of his time in college. He would regularly miss classes and not take school as seriously as he should. Then, a German professor, Roland Specht-Jarvis, said that he saw a future professor in Smiles.

“That was a lightbulb moment for me because I had been really stuck on what I wanted to do in college to that point or what I wanted to do when I graduated,” Smiles said. “I would never have pegged myself as a professor, but that German professor sparked something in me.”

That started Smiles on a path to the next level of his education. After a gap year following his undergraduate degree, he began a master’s degree program in Indigenous studies at the University of Minnesota Duluth. Besides spending one year in the Bulldogs’ marching band, Smiles used the time to incorporate his own Indigenous background into his degree.

A member of the Leech Lake Band of Ojibwe — a tribal nation whose reservation is in north central Minnesota — Smiles incorporated his Indigenous heritage and his interest in geography into his thesis at Minnesota Duluth. That continued in his work as a doctoral student at Ohio State, where he focused on the ways tribes protect burial grounds and other places from development. Smiles’ research used those protections for sacred places as a way to understand the contemporary political relationship between Indigenous people and the United States government.

In July, Smiles defended his dissertation over Zoom after four years in Columbus. He had officially earned his PhD. But because he was staying on at Ohio State as a postdoctoral researcher, he still had a musical itch left to scratch. Without those doctoral student time commitments, he had the ability to try out for the Ohio State Marching Band in 2020.

Over the summer, Smiles signed up for the band’s virtual Summer Sessions program to refine his cymbal work in preparation for fall tryouts. Much like at St. Cloud State, however, he stopped attending the lessons because of a fear of not being good enough and not being accepted. Eventually, after conversations with his wife, Abigail, and cymbal squad leader Michael Mayer, Smiles got the confidence he needed to try out.

“My wife said if I do it and don’t make it the band, I can at least say that I tried,” Smiles said. “But if I step back and don’t do this and I could have made the band, I’ll regret it for the rest of my life.”

So he completed his tryout video and waited. On Make The Band Night, Smiles heard his name called. Rehearsals began shortly after that, and Smiles felt right at home.

Smiles knows he can always count on band rehearsal to brighten his mood at the end of a day. While he’s working on his postdoctoral research in the Department of History, he’s also looking for academic jobs around the country. He’s not sure where the future might take him, but wherever his Point B is, he’s thrilled that everything came together for him to spend at least one year with The Best Damn Band in the Land.

“This has been one of the coolest things I’ve ever gotten to be a part of, and I’m really happy I decided to make the plunge and do it,” Smiles said.

This article was originally posted on the College of Arts and Sciences website https://artsandsciences.osu.edu/news/phd-hand-post-doc-scholar-joins-band?utm_campaign=daily_post&utm_medium=email